We decided to put ocean fishing in San Luis Obispo and a visit to Hearst Castle on the “To Do Next Time” list and headed east.  Hopefully the next time we are down this way  California won’t be suffering from a fire of this magnitude. 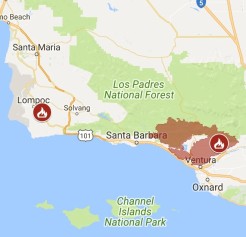 JP found San Luis Reservoir, where he could cast a line and we just kick for a few days. He caught a Striped Bass. He seemed quite content just being able to spend some time at the shoreline. California seems to make an effort to make access available for fisherman – always a good thing!

Its really pretty here even with the haze of smoke on the horizon. The water is smooth and just covered with ducks during the early part of the day. There are hundreds of them! When they take off it’s a wave of wings that sounds like a giant deck of cards being shuffled. JP has seen a few other fisherman,  but overall its quite and serene and feels like we are the only ones around for miles. Even the Camp Host has left for the season.

Near the park gates were a pack of 30 or so well fed squirrels. We heard the coyotes calling at night and saw a big one making its way through the field. There were plenty of deer and some hawks. All kinds of wildlife here.

Outside of the park there are acres and acres of solar panels. We finished our stay with a campfire to warm us up (its pretty damn chilly here at night)! Tomorrow we are up and at ’em and headed east to Clovis Calif. near Fresno.

One thought on “San Luis Resevoir”