JP passed on his AM fishing and we took a drive to a couple of small towns to the North. Plains is pretty small, not much to see but Thompson Falls had a cute downtown. We visited the Old Jail Museum which was built in the early 1900’s and closed in the late 1970’s. The original jail housed the inmates as well as the sheriff and his family. The sheriffs wife not only cooked and cleaned for the family but the inmates as well (lucky gal)! Back in the day if a woman was locked up in the jail her kids were often locked up with her. The cells were really, really small so that’s hard to imagine! 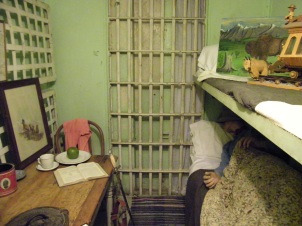 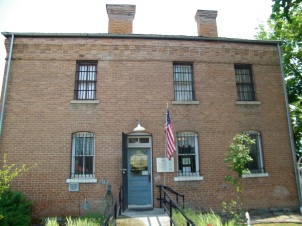 We headed south again and saw a “Watch for Bighorn Sheep” sign and shortly after saw some young ‘uns by the roadside. Yet another addition to our wildlife list. 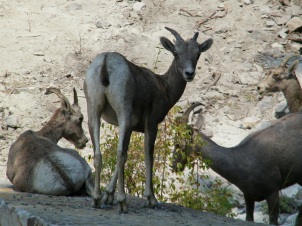 The homes of the Bighorn seems to be in the rugged cliffs. Bad Rock Trail is a pretty good example.

This was a portion of the sign in front of the above Bad Rock Trail:

“It was used by a parade of western notables, including explorers Isaac Stevens and John Mullan and by copper king William A. Clark.  Shortly after crossing over Bad Rock in 1841 Father Pierre-Jean DeSmet wrote “I had before seen landscapes of awful grandeur, but this one surpassed all others in horror.  My courage failed at the first sight.” Bad Ass Trail might have been a better name!

We stopped outside of Plains on our way back to meet the Gene the Uncle of our friend Chuck. What a lovely gentleman.  He and JP talked hunting and fishing while I admired his awesome home and view.  He leases land to a fella with a buffalo heard. How cool is that?